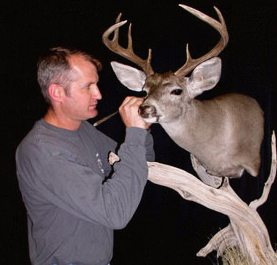 Mogollon Taxidermy’s head taxidermist grew up in Payson, Arizona. His younger years spent in the outdoors laid the foundation for his love of wildlife and hunting. Clay left Payson for a few years to obtain his degree in Wildlife Biology at Arizona State University. It was during this time that Clay’s interest in taxidermy began. He later worked for and with master taxidermists, learning the art. In 1997 Mogollon Taxidermy opened and soon became one of the premier taxidermy studios in Arizona doing work for clients from all over the Country.

We are located in the heart of Arizona, in the small town of Payson, nestled in the mountains at about 5000 feet above sea level below the majestic Mogollon Rim.

Payson sits within the largest stand of Ponderosa Pine in the world. We have four mild seasons, and yes, this part of Arizona does get snow. Hunting has been big in Rim Country since its first settlers moved to the area during the late 1700s and we now attract hunters from all over the southwest.

The majestic Mogollon Rim during the winter, which rises to 8,000 feet.This huge cliff structure is an escarpment, 200 miles long from east to west. 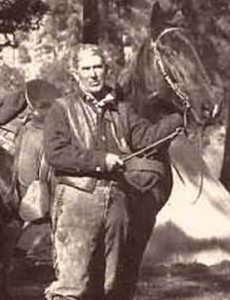 One very famous hunter in Rim Country was author Zane Gray. Under the Tonto Rim, Code of the West, To the Last Man, are all western thrillers written by Zane Grey, one of the most prolific writers of all time.

The inspiration for these and many of Grey’s 85 novels, 114 movies, and 215 short stories was what he called the “Tonto” (Mogollon) Rim, also known as “Zane Grey Country.”

His frontier epics were drawn from real life. Plots came from authentic range wars. Settings were created by lowering his manuscript and looking about him. Arizona’s Rim Country’s pioneering Haught family, some of whom served as guides on his hunting trips and from whom he bought land for his cabin, became featured characters in his novels.

The Mogollon Rim is home to a variety of wildlife. You’ll find Rocky Mountain elk, black 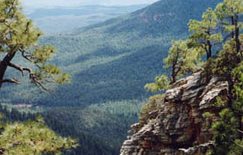 bear, deer, mountain lion, wild turkey, javelina, squirrel and raccoon as well as over 239 species of birds, including eagles, hawks and blue jays that call our area their home. When you are in Arizona, especially when hunting in Rim Country come and visit us, see what amazing things can be done with your animals.